Five teams comprising 35 men meticulously executed the highly technical and intelligence-based operation that culminated in the death of wanted gangster and Nabha jail-break mastermind Vicky Gounder, bringing to an end a saga of blatant criminal threats and naked propaganda on the social media.

Briefing media persons, DGP Suresh Arora thanked Chief Minister Captain Amarinder Singh for his fulsome appreciation of the police success and assured of continued efforts to crack down on other gangs and gangsters still active in Punjab. He disclosed that as many as 17 A category and 21 B category gangs were believed to be active in the state as of Jan 2017. While some gangsters had been arrested since then OCCU was now concentrating on the remaining 8 A category 9 in B category gangsters.

Arora and DGP Intelligence Dinkar Gupta, who coordinated the teams along with IG OCCU Nilabh Kishore, told media persons that the most wanted `A’ category gangster Harjinder Singh @ Vicky Gounder was finally traced through intelligence gathering, and from multiple sources coupled with ground operations.

Two pistols of .32 bore and one pistol of 0.30 bore, and a large quantity of ammunition along with an ammunition belt ,Swift Dzire car with fake number plate , mobile phones and dongles were recovered from the possession of the gangsters.

Gounder, who had a reward of Rs 7 lakh from Punjab Police and another from Rajasthan Police. He was using multiple Facebook accounts, operated through associates in various countries including the Gulf nations, Cyprus and Germany, disclosed Dinkar.

Sharing operational details of the encounter, the DGP said the Organized Crime Control Unit (OCCU) of Intelligence Wing, under the guidance of Dinkar Gupta got information that these two gangsters were spotted in the border districts of Fazilka, Ferozepur and Taran Tarn. On January 24, an OCCU advisory was issued listing out five districts reporting possible movement of the gangsters and additional forces were sent out there.

On further getting specific information that their movement was seen in the area of Police Station Sarwar Khuhian, district Fazilka, a team of OCCU, under command of AIG Gurmeet Singh Chauhan and  Inspector Bikram Brar, was dispatched there.

Five teams were constituted to raid the `Dhanni’ and nab the gangsters. The operation started at 5.30 p.m. on Friday. While one team covered the house from the roof-top of the neighbouring house, another covered the rear boundary wall, and the third entered from the main gate, with the remaining teams covering the two other doors.

On seeing the police party, three persons came out from a room and started firing on the cops. One of them took shelter behind a mini bus, while two others ran towards the rear boundary wall, with the former giving them covering fire. In spite of repeated appeals to surrender, they also continuously fired at the police party, injuring SI Balwinder Singh and ASI Kirpal Singh. In retaliatory firing, Gounder and Lahoria were shot dead. The third person, whose identity is yet to be established, was shifted to Civil Hospital, Abohar, with injuries, to which he succumbed.

On checking, it was found that the ‘Dhanni’ was technically inside the jurisdiction of village Pakki, PS Hindumal Kot, district Ganganagar, Rajasthan, which is hardly 50 meters from Punjab’s border. On the statement of Inspector Bikram Brar, case FIR No. 26 dated 27-01-2018, u/s 307, 332, 34 IPC, 25-27-54-59 Arms Act, PS Hindumal Kot, District Ganganagar (Rajasthan) was registered and investigation was taken up by Ganganagar Police.

NCRB organized All India Conference of Directors of Fingerprint Bureaus 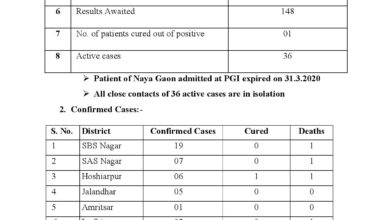 Covid-19 update; some good some bad news for Punjab 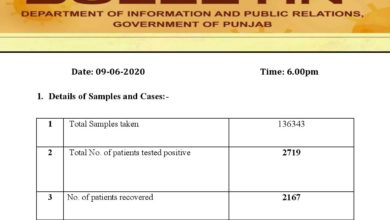 Covid-19 update; gap between confirmed and cured cases is increasing in Punjab 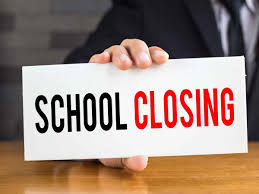